“Don’t you open up that window.“

“Don’t you let out that antidote.“

“Poppin’ pills is all we know.“

“In the hills is all we know; Hollywood”

“Don’t go through the front door; Through the back!”

“It’s lowkey at the night show.“

“So don’t you open up that window.”

“Don’t you let out that antidote.” 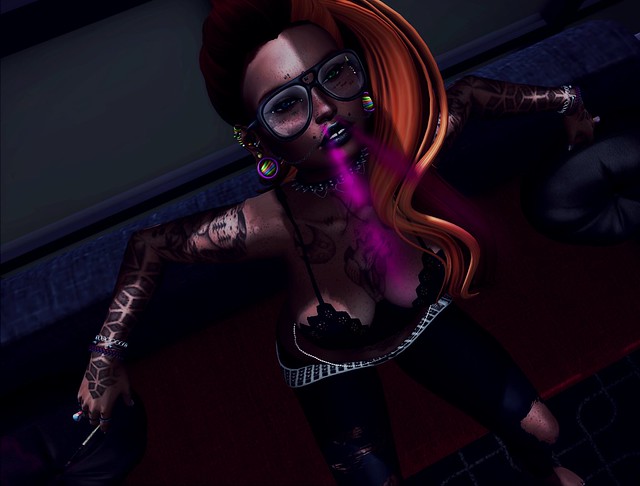 “Anything can happen at the night show.”

“Everything can happen at the night show.“

“At the night show.”

“Anything can happen at the night show.”

“At the night show.”

“If you wanna roll, I got a place where…”

I worked really hard on this photo telling series, a picture is worth a thousand words and I’ll let your words determine what’s going on here. I also have two photos on my flickr stream rated as restricted, because it has some nudity on the television screen that I didn’t want anyone to flag me. So you’ll have to go there to finish viewing the rest of the photo telling.

I’m not one hundred percent back to blogging regularly, but when I do you’ll know. This is some previous items I’ve gotten in packs and forgotten about it. My girlfriend Brawen photobombed my set, BUT I was like omfg I love that pose it works so well with you and so I just added her into the photo.  The pose that -I- am in was made by me, which if you want it. I’ll upload it and give it to you free of charge.

Now you’re noticing something here right? Syn’s human face looks different? You’re right. I finally made the jump to get a mesh head. Does it look like her normal face? Hell no. Does it stand with me? Yes. I’m not 100%….thrilled? I think that’s the word, if anyone know Syn’s face is tatted up, has moles all over, dark huge eyebags. I thought with it being a mesh head you can do it like a system head where I CAN have all that stuff. I can’t. It took me about four nights to figure out how to get the tattoo from Miko to work, eyeshadow, eyeliner, lipstick, and moles to work. It doesn’t work, laugh out loud.  I only have Tattoo, Eyeliner and Lipstick. No moles or eyeshadow I can’t wear my tattoos and eyeshadow at the same time. Sucks, only sad part so I gotta wear just eyeliner.  I don’t know much about mesh heads, laugh out loud. I’m a furry 96% of the time. That 4 percent I’m human. Why did I make the jump to mesh heads? It looks BETTER, It’s not Syn’s face but it suits her. Unlike Brawen’s her head which is Catwa as well suits her so much it looks like her normal avatar head.

Anyways enough about my small rant about my thoughts on mesh heads. Credits below.

** A little side note when Lumae made the head appliers at the time only Three Catwa heads came out so the eye ducts doesn’t fit well when you first try it on, I had to fiddle around to see which eye ducts looked better and it was Annie. The eye ducts still are a little off, but it’s not nearly as off was the other two and the Omega version. Eyeliner or eyeshadow will cleverly cover it up, also She’s revamping the Eirtae head appliers to fit a bit better. **

Circa Living – Vibe – Retro Chair B