Where was my mind at when I took these photos? I was in going for an elegant, creepy sea creature.  Something like a Modern day Ursula. Like if I was to remake her, this is what she would look like on two legs. I wanted to focus on the skin, hair, eyes and mouth. As I stated before I’m kind of the last one to get some of the mesh items. Can you blame me, no. I’m furry like 95% of the time. It would be nice to have some of the items just to have, but it’s not a necessary for me. At the Fantasy Faire I did stumble upon a booth called Soul, and it has a mesh mouth out in several different styles from regular cupid, orc, neko and vampire. I’m not an expert on the mesh mouths, but it’s a nice simple mouth. I think it’s a little small for my face like it needs to be wider, but I can see myself wearing this mouth for something basic. 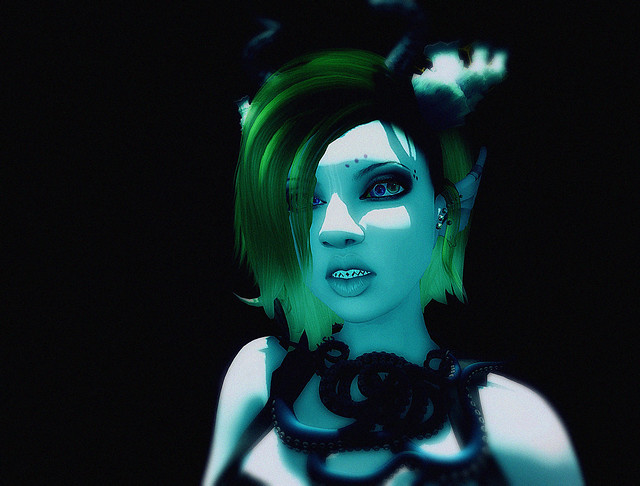 Ears: Eclectica – Gargoyle Ears – Fleshtones [New][@ Fantasy Faire 2015] [Side note: These ears were a bit difficult to tint. Even reading the instructions and fiddling around the tint wasn’t anywhere near the color it was a tad darker]